This project was honoured by the IHS Jane’s ATC Awards

The RunWay Status Lights (RWSL) system implemented since June 2016 was the winner in the category “Safety and efficiency on the runway and final approach” of the IHS Jane’s ATC Awards at the World ATM Congress in Madrid on 7 March 2017. Nominations are assessed by a panel of experienced judges.

Paris-Charles de Gaulle is one of busiest airports in Europe with 4 runways. To further reduce runway incursions, DSNA, the French air navigation service provider, and Groupe ADP, the Paris airports operator, have invested in a fully automatic, safety advisory system : the RWSL system. Built on a SESAR solution, this system provides pilots and vehicule drivers with immediate, accurate and clear indications when the runway is unsafe to cross, enter or take-off.

Maurice Georges, DSNA CEO, said: “This project is the result of close cooperation between all of the platform partners: Groupe ADP installed a special lighting system, DSNA modified the radar surveillance sytem and the airline companies assisted with the operational validation phase. EUROCONTROL’s participation in the safety studies was also a great value. And we appreciate that the the European Commission has cofinanced DSNA for the final deployment. RWSL at Paris-CDG has already proved its value !”

Franck Goldnadel, Executive Director of Groupe ADP, Director of Airport Operations and Managing Director of Paris-CDG airport: “The RWSL was entering service H24 on the Northern inner runway (09R/27L) in June 2016. It will also be deployed on the Southern inner runway (08L/26R) before the end of March 2017. The RWSL system improves significantly the situational awareness of pilots and vehicle drivers.’’

“We are delighted to see this SESAR Solution deployed at Paris-CDG, which is the first one of its kind commissioned in Europe. We look forward to seeing many more SESAR results go into operation and count on SESAR members and partners to continue to blaze a trail in European airport and air traffic management modernization," said Florian Guillermet, Executive Director of the SESAR Joint Undertaking.

RWSL is a type of autonomous runway incursion warning system (ARIWS) as defined in ICAO Annex 14 aerodromes. Also deployed in the USA and in Japan, France participated, together with Japan, the USA and other worldwide experts in criteria harmonization promoted by ICAO to ensure worldwide and consistent operational use where implemented. 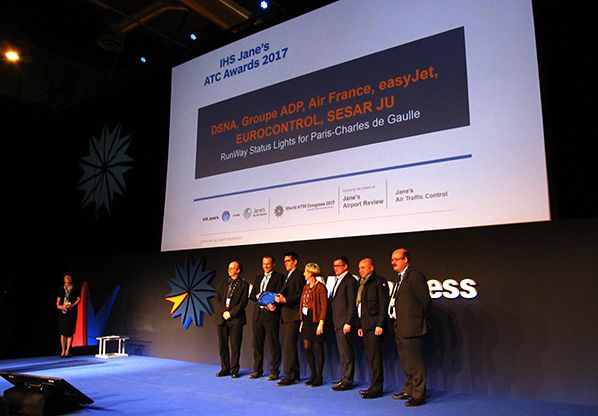 Boasting an exceptional geographic location and a major catchment area, the Group is pursuing its strategy of adapting and modernising its terminal facilities and upgrading quality of services; the Group also intends to develop its retail and real estate businesses. In 2015, Group revenue stood at €2,916 million and net income at €430 million.

The SESAR Deployment Manager is the official title of the organisation that is coordinating the upgrading of Europe’s air traffic management infrastructure. The main task of the SDM is to develop, propose and maintain the Deployment Programme of SESAR concepts and technologies and ensure efficient synchronisation and overall coordination of implementation projects, as well as the related investments in line with the Deployment Programme.