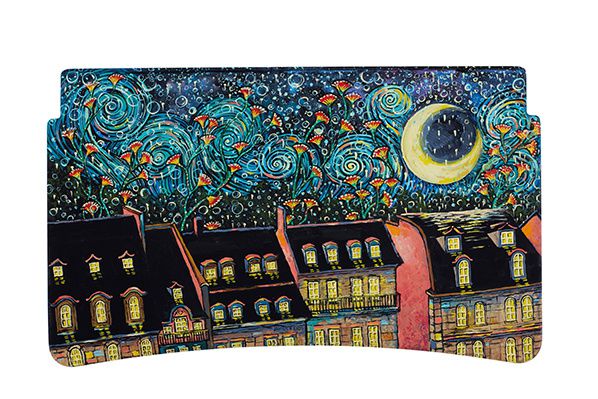 Delta Air Lines (NYSE: DAL) and The Coca-Cola Company have teamed up to bring art to the place where the two brands meet most often – the tray table.

Together with 12 artists from around the world, Delta and Coca-Cola have created an art gallery in the sky – transforming the tray tables on one of the airline's 767 aircraft into one-of-a-kind works of art.

Each artist brought their own personal style and taste to their trays and drew inspiration from some of the airline's most popular destinations, including: Amsterdam, Atlanta, London, Los Angeles, Mexico City, New York City, Paris, Sao Paulo, Seattle, Seoul, Shanghai and Tokyo. Each piece of art celebrates themes of optimism, travel, refreshment and happiness.

In addition to the in-the-air art gallery, Delta will be displaying the original trays in Concourse A, between gates A15 and A11 at Atlanta's Hartsfield-Jackson International Airport. The trays will extend in social with additional content, including video footage and other behind-the-scenes assets of the artists in action. More on each artist and their specific tray table art below:

Delta and Coca-Cola's partnership began in 1927 and was strengthened in 1941 when Delta moved its headquarters to Atlanta, the hometown of The Coca-Cola Company. Today, the airline serves Coca-Cola products on all flights and in Sky Clubs, serving more than 354 million drinks per year.

Delta, along with creative agency Wieden+Kennedy New York and Coca-Cola, developed and implemented the art gallery. About The Coca-Cola Company

The Coca-Cola Company (NYSE: KO) is the world's largest beverage company, refreshing consumers with more than 500 sparkling and still brands and more than 3,800 beverage choices. Led by Coca-Cola, one of the world's most valuable and recognizable brands, our company's portfolio features 20 billion-dollar brands, 18 of which are available in reduced-, low- or no-calorie options.

Our billion-dollar brands include Diet Coke, Coca-Cola Zero, Fanta, Sprite, Dasani, vitaminwater, Powerade, Minute Maid, Simply, Del Valle, Georgia and Gold Peak. Through the world's largest beverage distribution system, we are the No. 1 provider of both sparkling and still beverages. More than 1.9 billion servings of our beverages are enjoyed by consumers in more than 200 countries each day.

With an enduring commitment to building sustainable communities, our company is focused on initiatives that reduce our environmental footprint, create a safe, inclusive work environment for our associates, and enhance the economic development of the communities where we operate. Together with our bottling partners, we rank among the world's top 10 private employers with more than 700,000 system associates. For more information, visit Coca-Cola Journey at www.cocacolacompany.com, follow us on Twitter at twitter.com/CocaColaCo, visit our blog, Coca-Cola Unbottled, at www.coca-colablog.com or find us on LinkedIn at www.linkedin.com/company/ the-coca-cola-company.

Delta Air Lines serves more than 180 million customers each year. In 2016, Delta was named to Fortune's top 50 Most Admired Companies in addition to being named the most admired airline for the fifth time in six years. Additionally, Delta has ranked No.1 in the Business Travel News Annual Airline survey for an unprecedented six consecutive years. With an industry-leading global network, Delta and the Delta Connection carriers offer service to 323 destinations in 57 countries on six continents.

Headquartered in Atlanta, Delta employs more than 80,000 employees worldwide and operates a mainline fleet of more than 800 aircraft. The airline is a founding member of the SkyTeam global alliance and participates in the industry's leading transatlantic joint venture with Air France-KLM and Alitalia as well as a joint venture with Virgin Atlantic. Including its worldwide alliance partners, Delta offers customers more than 15,000 daily flights, with key hubs and markets including Amsterdam, Atlanta, Boston, Detroit, Los Angeles, Minneapolis/St. Paul, New York-JFK and LaGuardia, London-Heathrow, Paris-Charles de Gaulle, Salt Lake City, Seattle and Tokyo-Narita. Delta has invested billions of dollars in airport facilities, global products and services, and technology to enhance the customer experience in the air and on the ground. Additional information is available on the Delta News Hub, as well as delta.com, Twitter @DeltaNewsHub, Google.com/+Delta, and Facebook.com/delta.