The extraordinary Sinan Erdem Dome will be the stage for the exciting final round of the championship, which will be played from May 19th to 21st between CSKA Moscow, Real Madrid, Fenerbahçe and Olympiacos Piraeus

Turkish Airlines EuroLeague Final Four 2017 will take place this weekend in Istanbul. This season has been particularly demanding for the 24 participating teams, and the championship will culminate with four exciting matches played by highly deserving teams to get the trophy: CSKA Moscow, Real Madrid, Fenerbahçe and Olympiacos Piraeus. 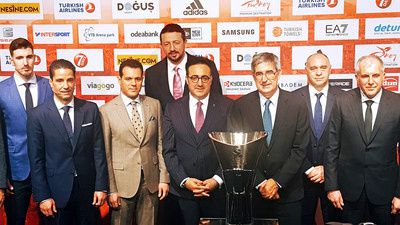 The intense final round

The intense final round of this competition returns to Istanbul, the welcoming and attractive metropolis of Turkey, five years after the EuroLeague Final Four 2012. The matches will take place in the famous Sinan Erdem Dome, Turkey's largest indoor arena and one of the biggest in Europe, where the final round of the 2010 World Basketball Championship was also celebrated.

M. İlker Aycı, Chairman of the Board and the Executive Committee of Turkish Airlines, said that Final Four taking place in İstanbul for the second time showed the city's excellent setting for sports events that unite millions all around the world in excitement, passion and joy. "İstanbul once again welcomes basketball fans from all across Europe to witness the excitement as the best teams of the continent face each other to be the Champion. As the airline that flies to more countries than any other, it is our core mission to bridge peoples, continents and worlds not only through our wide network but also a diverse range of sponsorship activities that we've been engaged in for many years. Our strong backing to the Turkish Airlines EuroLeague underlines the importance we attach to the passion of sports, the values of sportsmanship and friendly competition in fulfilling our mission."

"After five years since the last Final Four in İstanbul, it is a pleasure to be in this great city once again to watch the EuroLeague Champion crowned. Fans from all across Europe will witness the best teams of the continent and we are sure that, just like the previous Final Four in İstanbul, this year's finals will go down in basketball history." stated Mr. Jordi Bertomeu, Euroleague Basketball President and CEO. "I would like to specially thank Turkish Airlines and Mr. Aycı for the warm welcome we have received and all the support they have shown, being integral to bring the Final Four back to Istanbul."

EuroLeague Basketball was created in the 2000/2001 season. In 2010, Turkish Airlines, flying to more countries and international destinations than any other airline in the world, became the official sponsor of the most important basketball competition in Europe, as well as its final round. For this season, the flag company will celebrate the Final Four in Istanbul, in its home, making this collaboration even more special, with a really welcoming audience encouraging all the teams. The global brand has even themed the TC-JRO Airbus A321, livering its exterior with graphic allusions to the EuroLeague, which is flying around the sky over Istanbul.

Turkish Airlines sponsorship to the EuroLeague Basketball will continue for three more years.